Following the cessation of Civil War hostilities, the US military found itself inundated with the new technology that had quickly developed due to the needs of war. The muzzle-loading days were nearly at their end, as Springfield Armory’s Master Armorer, Erskine S. Allin had begun the process of modifying M1861/63 muskets into the M1865 and later M1866 “Allin Conversion” Trapdoor rifles. These early Trapdoors would see some action during the Indian Wars of that era, but did suffer from problems and were soon to be replaced by a production version of the design with the M1873 Trapdoor rifle. 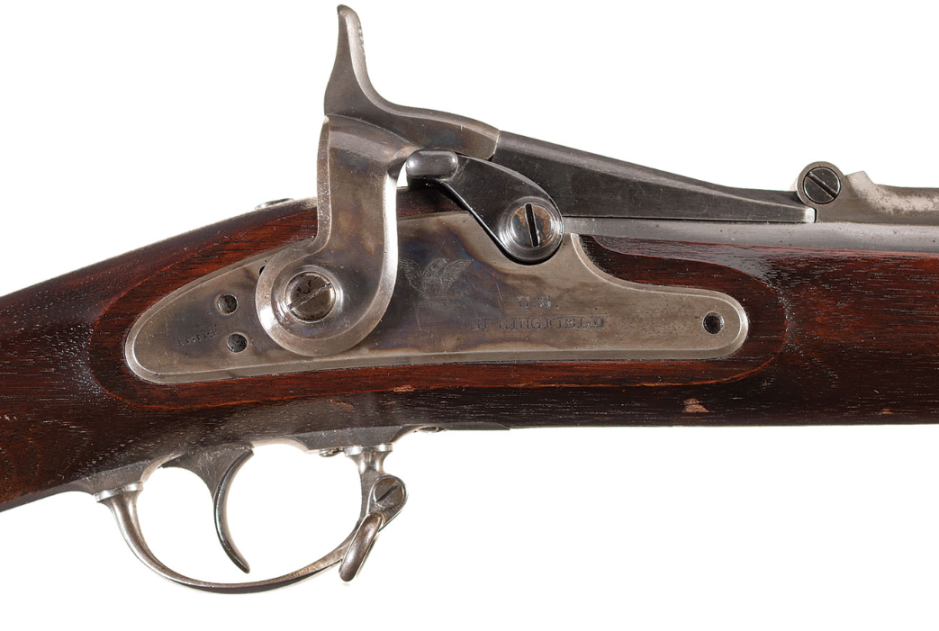 M1866 Allin Trapdoor conversion of a M1864 made Springfield musket.

The Navy and Marine Corps of the immediate post-war era would experiment with various other designs, including the Remington Rolling Block rifle, which was issued just several years prior to the M1873 Trapdoor becoming the standard service rifle. Still, many Marines were using M1861/63 Springfield muskets, which was a concern to Marine leaders as the operation tempo of landings to protect US interests abroad was increasing.

Remington Rolling Block rifle, used briefly by US Navy and Marines immediately prior to the standardization of the Springfield M1873 Trapdoor rifle. 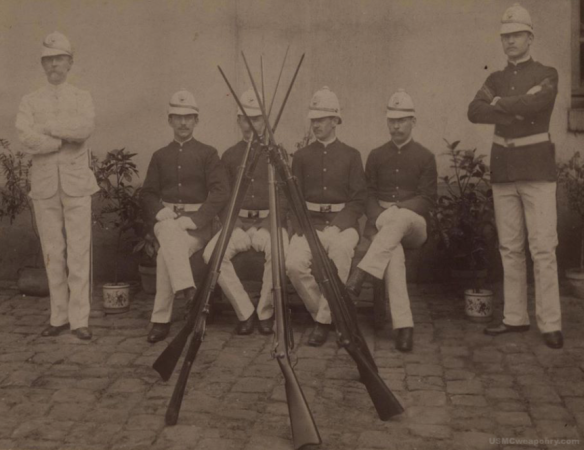 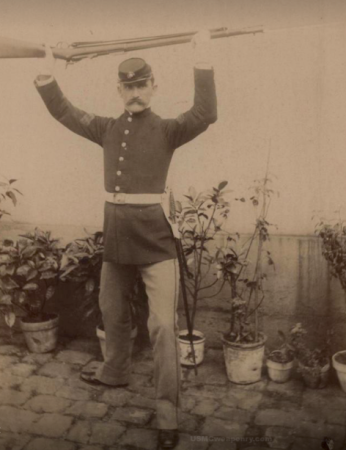 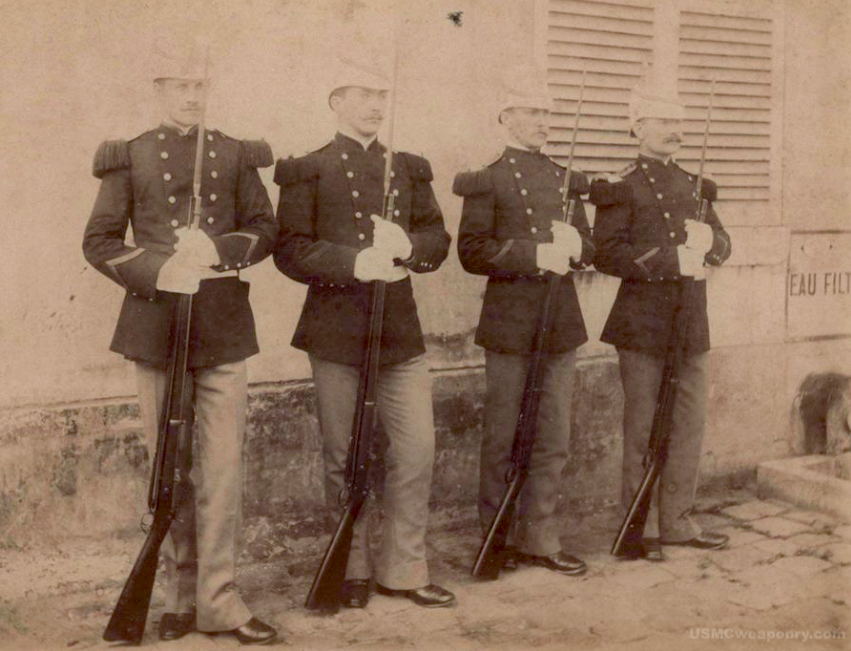 The Trapdoor become commonplace amongst the US armed forces in the 1870s, and it’s .45-70 cartridge, loaded individually at the breech, would render muzzle-loaded muskets obsolete. Further improvements to the Trapdoor rifle would manifest with the M1884, which would most notably feature the implementation of the peep sight rear sights, as designed by the Ordnance Department’s Lieutenant Colonel Adelbert R. Buffington. Called “Buffington sights” in honor of their creator, the addition of the peep sight for accurate known distance fire was heartily embraced by the Marines. Operationally, the Marines were still often deployed for global crises, but no large scale conflict would involve the Corps until the Spanish-American War broke out in 1898. 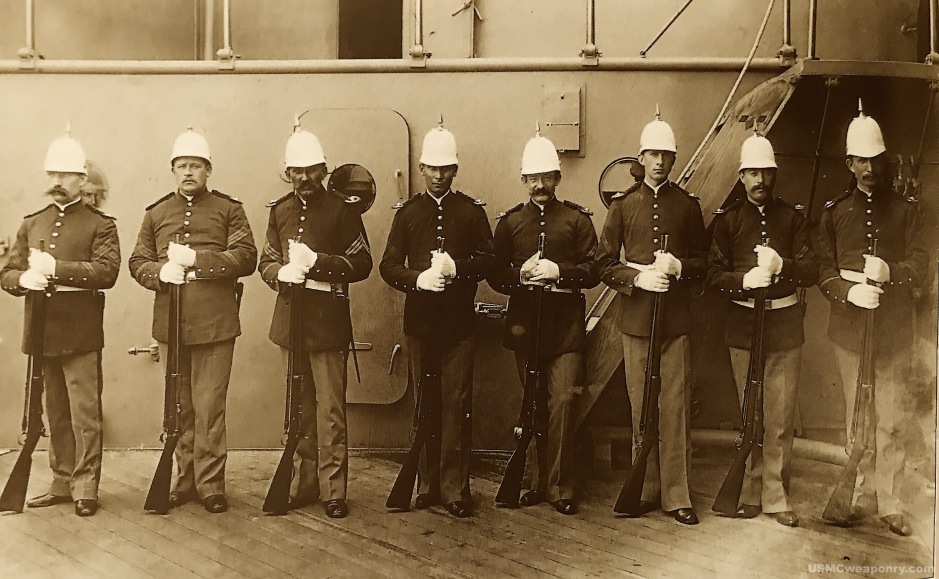 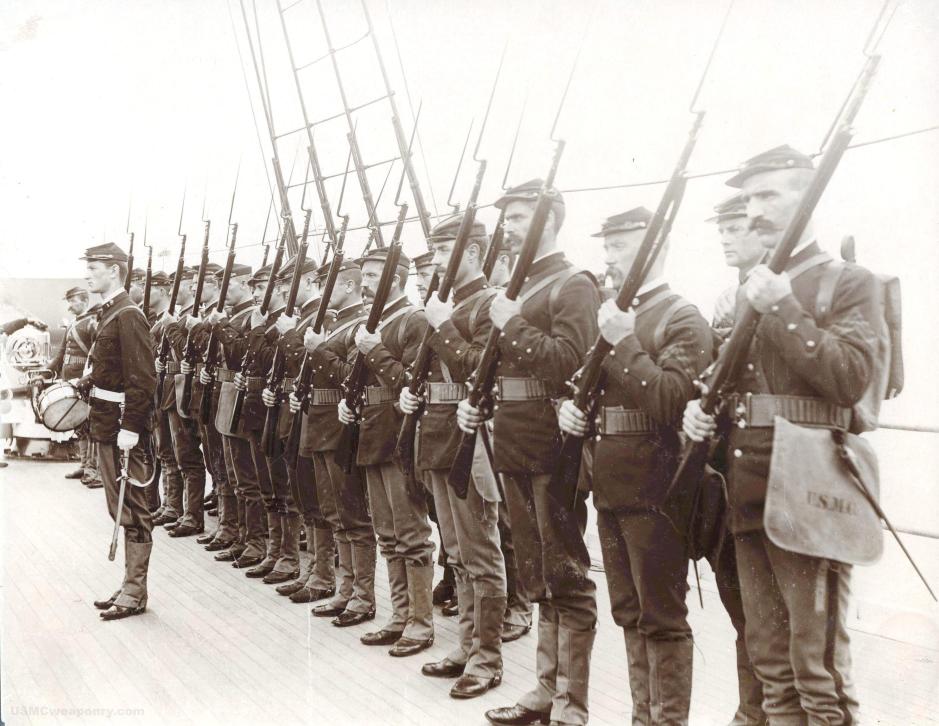 By the outbreak of war with Spain, the Marines had begun to replace the M1884 Trapdoor with the M1895 Winchester Lee-Navy rifle. However, it would see some use in Cuba and later China during the Boxer Rebellion. Identifying a Marine Tradpoor is for now practically impossible, as there have been no Marine serial numbers uncovered at the National Archives as of yet. There were however six Trapdoors recovered during the salvage efforts for the battleship USS Maine. Author John McAulay mentions in his book Rifles of the United States Navy and Marine Corps 1866-1917 that the Maine received its initial outfitting of Trapdoors from the Marines, making these six rifles the only documented USMC Trapdoors to exist as of now. While finding one is a gargantuan task, the collector looking for a nice placeholder in their collection would be well served with any M1884 Trapdoor, as most photos show Marine Trapdoors having Buffington sights. 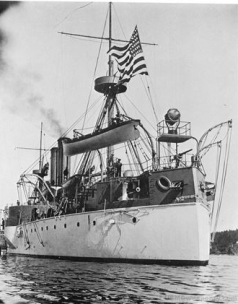 The USS Maine prior to the explosion that started the Spanish-American War (photos: USN). Of the roughly eighty Winchester M1895 Lee-Navy rifles and six Springfield M1884 Trapdoor rifles recovered from the USS Maine, The Francis Bannerman company would purchase fifty-four of the Lee-Navies and all of the Trapdoors for resale to commercial buyers.

An extraordinary example and the only known USMC provenance Trapdoor to have been identified thus far, this particular rifle was one of six recovered form the battleship USS Maine’s salvage efforts, and later sold by Francis Bannerman’s surplus arms company (Tyler Anderson collection).

Slideshow of the USS Maine Trapdoor rifle. Some small parts, like the rear sight, have been replaced. It is nearly certain it originally had a Buffington rear sight while in service, and Bannerman replaced damaged or missing parts with those on hand (Tyler Anderson collection). 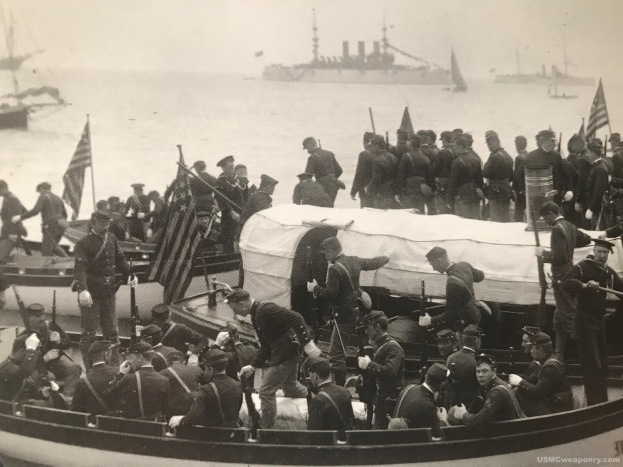 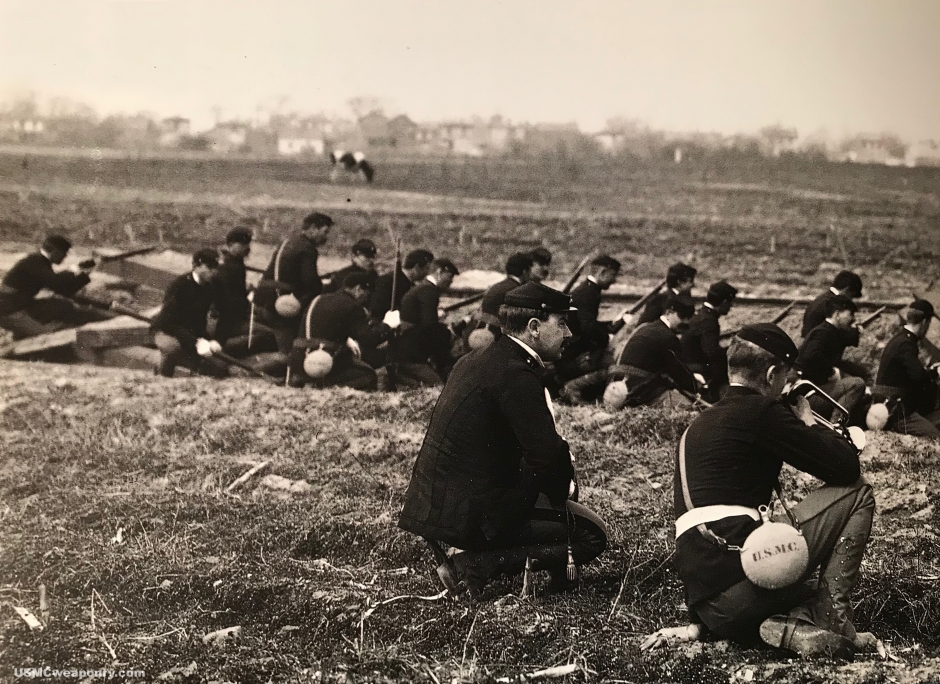 The final use of the Trapdoor rifle operationally would occur in China during the Boxer Rebellion, when the Marine detachment from Cavite in the Philippines set sail to join Major Littleton Waller’s hastily assembled 1st Marine Regiment. The Cavite detachment was still armed with Trapdoors, and would see action at Tientsin. Most Marines in China were armed with the Winchester M1895 Lee-Navy, while some had Springfield Armory’s newest rifle, the M1898 Krag-Jorgensen. The “Krag” as it was referred to would be the rifle of the future for the Marine Corps, and would replace all other rifles in Marine hands in the next few years. 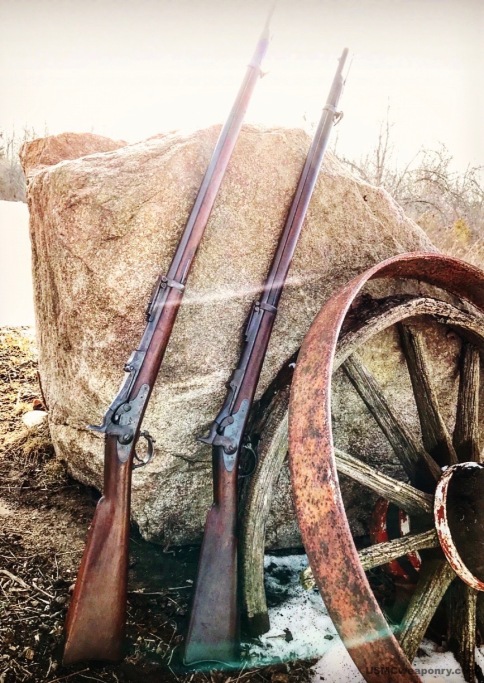