Short lived but well used, the “Lee Rifle, Model of 1895, caliber 6-mm” as it was officially designated was an upgrade from the Springfield M1873 Trapdoor Rifle. Designed by the brilliant Jame Paris Lee to replace his earlier M1885 Lee Navy produced by Remington, the M1895 Winchester Lee Navy was an accurate rifle with a relatively small .236 caliber that fired at roughly twice the velocity of the M1873 Trapdoor rifle, making it capable of engaging an individual target at a distance of 600 yards. Showcasing James Paris Lee’s exceptional forward thinking, the M1885 Remington Lee Navy featured  a detachable box magazine, the first standard issue US military rifle to do so. The M1885 was chambered in the M1873 Trapdoor’s  familiar .45-70, and used the same style ladder sight system. While evidence is scarce, there are some suggestions that Marine detachments aboard naval warships were equipped with the M1885 Remington Lee Navy. It is possible, if not likely, that the earlier Remington Lee Navy rifles were solely issued to the Navy proper, and used by the Marines in lieu of the Trapdoor on occasion. 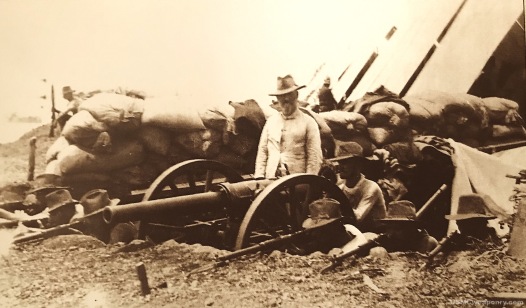 The Marines at right would make good use of their new Winchester M1895 Lee Navy rifles during combat in Cuba (photos: USMC).

Staged photo showing an element of Marines with M1895s around the turn of the century (photo: USMC)

Implementation of the Lee Navy was delayed due to setbacks in development, with rifles being delivered to the Marine Corps over a year behind schedule. The delay in the changeover led to conflict inside the Department of the Navy, as the Commandant of the Marine Corps, Colonel Charles Heywood made clear that the Marine Corps would not approve of piecemeal shipments of the rifle, but would require an initial fitting of 3,000 Lee Navy’s with enough ammunition to allow for proficient range time. These demands were met, and while it is known that the Marine Corps received at least 3,000 of the first contract of 10,000 rifles, the serial numbers of those supplied to the Marines are largely undiscovered. 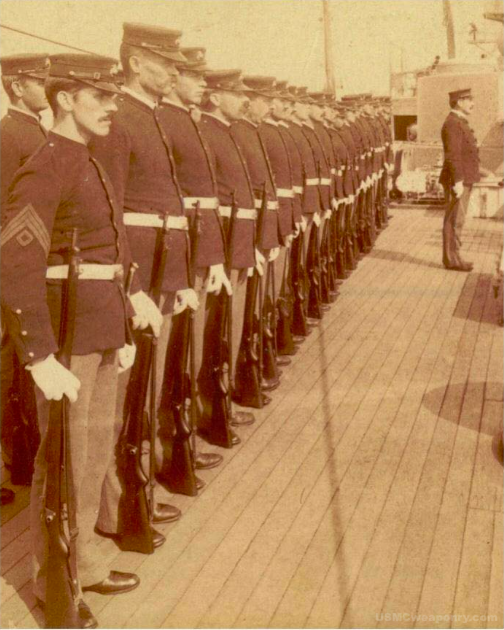 In the field, the Lee Navy was fairly reliable. Criticism of the rifle was mostly focused on the floating extractor, which anyone who handled the rifle will note is surprisingly fragile. The frailty of the extractor has made the Lee Navy a dangerous rifle to shoot for present day enthusiasts who try to hand load cartridges that feature re-sized and modified brass, as factory ammunition has been out of production for nearly a century. Finding relic cartridges manufactured for military service is extremely difficult, as single rounds boast a significant value. The flat trajectory of the Lee Navy cartridge made for an excellent “battle sight zero,” or BZO as it is called by the Marines. Marines were trained to aim at the belly button of an enemy from point blank range to 600 yards, only adjusting the elevation on their sights if ordered to do so by small unit leaders. 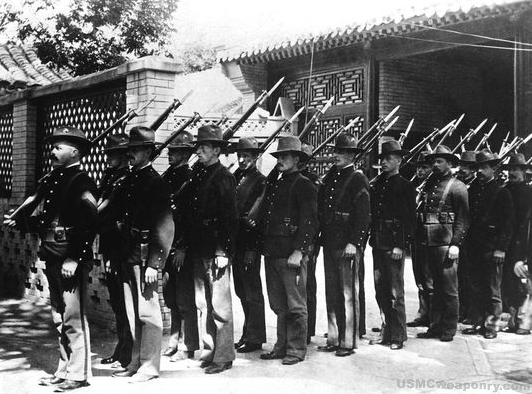 Marines in China, bayonets fixed to their M1895s (photo: USMC)

The global combat of the late 19th Century would see a rise in prominence for the very small cadre of US Marines, and the emergence of the service’s reputation as highly skilled marksmen. Part of this would be due to the training and constant drilling men like Lieutenant Colonel Robert Huntington would demand of his Marines. Lt Col Huntington was in command of the First Marine Battalion, and his unit would be tasked with combat operations in Cuba following the sinking of the battleship USS Maine. Issued Lee Navy rifles just prior to departure, Lt Col Huntington oversaw the familiarization of the new rifle to his Marines through marksmanship practice and combat drills. This training would pay off in victory. During the Battle of Cuzco Wells, the Lee Navy would earn a reputation as a deadly accurate and advantageously lightweight system, which allowed the Marines to carry more ammunition due to the smaller size of their rounds. Effectively engaging the Cuban forces from distance of over a thousand yards, The fleeing Spanish forces would be shocked by the accuracy of the Marine riflemen. Of note, this was also the first battle where a US military element utilized the doctrine of “fire and maneuver,” as Marines armed with M1895 Colt-Browning “potato digger” machine guns would  constantly move forward from one position to another, covering the assaulting Marine riflemen with withering suppressing fire, a doctrine that still holds strong today.

The unique straight pull action of the M1895 Winchester Lee Navy allowed for a much higher rate of fire than its single loading M1873 Springfield Trapdoor predecessor (Tim Plowman collection).

The most famous use of the Lee Navy would occur half a world away in China during the Boxer Rebellion, where Marine legends Dan Daly and Smedley Butler would first become famous for their gallantry. Tasked with defending the American embassy, 25 Marines led by Captain John T. Meyers would partner with troops from the United Kingdom, Russia, France, Japan, Germany, Italy and Austria-Hungary in their defense of the diplomatic compound in Peking. Captain Meyers would famously lead an assault through encroaching Chinese barricades, losing two men and being wounded in the process but succeeding in pushing the Boxers back hundreds of yards. Myers men, though drastically outnumbered, would continue to hold out against constant Chinese fire. The accuracy of their Lee Navy rifles played no small role in the Boxer failure to overrun the Marine position.

The Lee Navy’s bayonet would often find itself employed during its service history (photo: USMC).

Finding factory ammunition for the M1895 Winchester Lee Navy is not an easy task, as it has been out of factory production since the early 20th Century (Tim Plowman collection).

Hastily scrapped together reinforcements from the 1st Marine Regiment and the Marine Detachment at Cavite in the Philippines would form a battalion under the command of Major Littleton Waller. Combat would soon follow, including the Tientsin actions that would see Lieutenant Smedley Butler wounded while saving a wounded Marine under heavy fire, and given a brevet promotion to Captain. Dan Daly, then a private, would earn his first Medal of Honor for his lone stand on the Tartar Wall which protected the embassy. Armed with his Lee Navy rifle, Daly would inflict some 200 casualties amongst the attacking Boxers, standing his ground under incredible fire throughout the night. 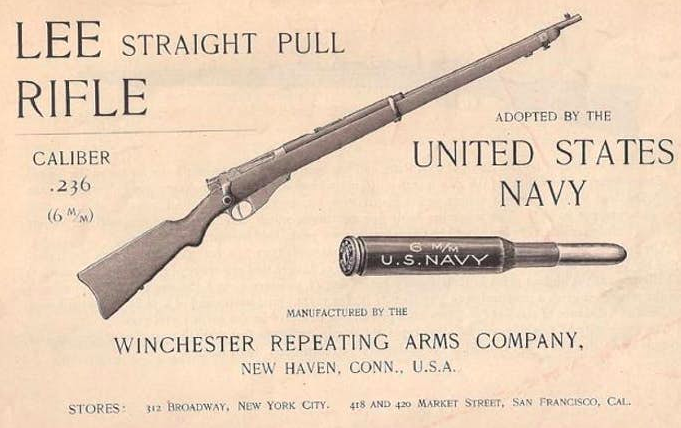 The Lee Navy manual, courtesy of a generous donation to forgottenweapons.com