Perhaps the most iconic American firearm, the M1911 served the Marine Corps well on foreign battlefields across the globe during the 20th Century. A sharp, clean looking design that would set the standard for the modern sidearm, the M1911 would prove itself on the battlefield many times over. The Marine Corps would embrace the M1911 enthusiastically, receiving their first allotment of 300 pistols in 1912, and by 1918 would have at least 5,500 M1911s in their possession.

The M1911 would be adopted by the Marine Corps not long after production, and would be very well received (documents: Tim Plowman/NARA). 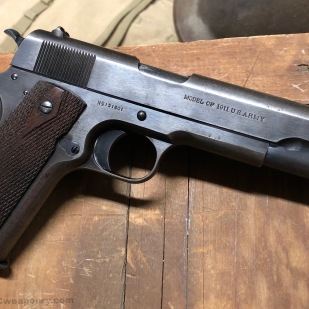 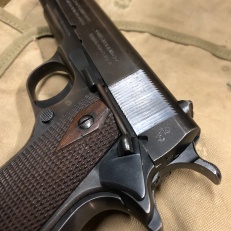 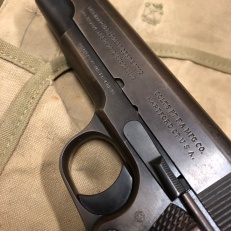 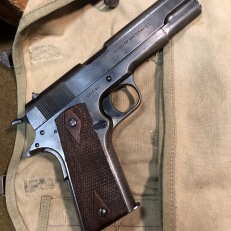 Prior to the adoption of the M1911, the Marine Corps had quickly cycled through a series of Colt revolvers. The first was a variation of the Colt M1892 dubbed the “Model 1905 Marine Corps,” which like other .38 caliber revolvers was maligned for a lack of “stopping power.” The solution would be the Colt” USMC Model of 1909,” and its beefier .45 LC round. The M1909 was a robust pistol that performed its duties adequately, but the advent of John Browning’s M1911 would render it obsolete for an expeditionary, close infantry action service like the Marine Corps.

The Colt USMC M1909 Revolver was the short lived predecessor of the M1911 (Tyler Anderson collection). 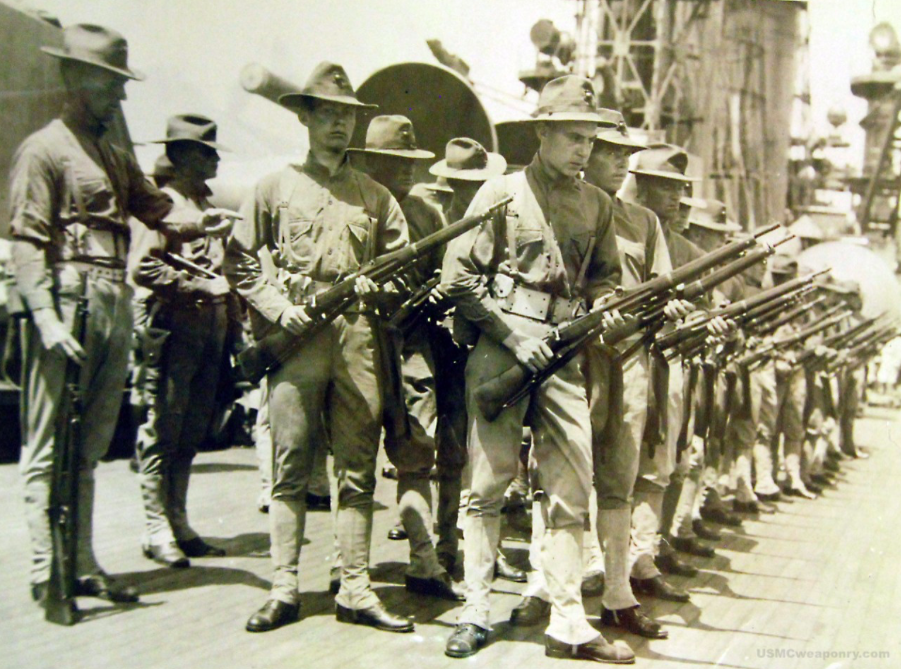 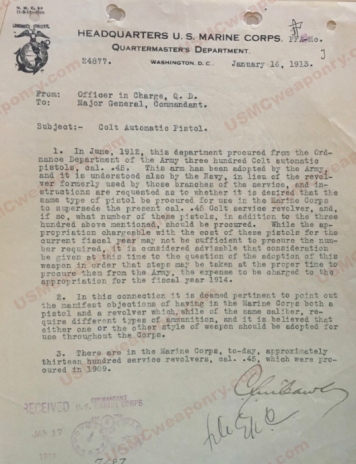 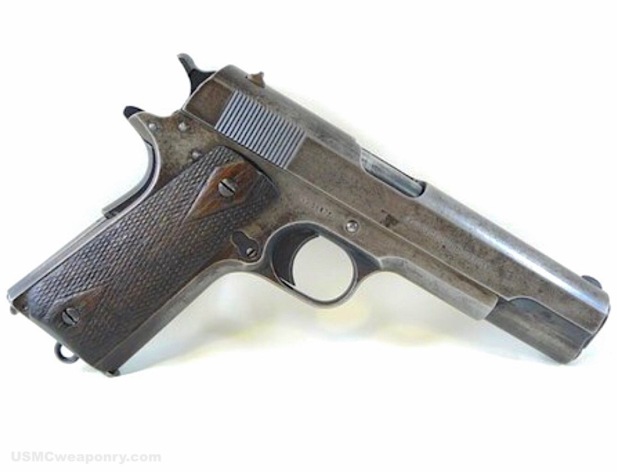 M1911s would be deployed almost immediately with the Marine Corps’ expeditionary forces, and be found to be excellent sidearms in combat. Marine legends like Colonel Joseph Pendleton would write glowing reviews of the new pistol, noting that it was twice as accurate as previous revolvers and possessed an exceptional smooth action with low recoil. As as service, the Marine Corps was notoriously skeptical and thorough in weapons testing, usually taking a significant amount of time to warm to a new weapon. The M1911 would be the exception, being accepted in earnest from the beginning. With high marks in all categories, the Marine Corps would procure the M1911 in earnest during the years leading up to World War One. 5,500 M1911s, shipped in sequential serial number order would be acquired prior to 1918. While Colt kept excellent shipping records up until 1918, the tremendous increase of production coupled with the demand for speedy shipments relegated M1911 disbursement to Ordnance Department officials. As such, the exact number of pistols the Marine Corps received during World War One is unknown, though likely significant. 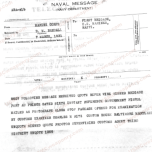 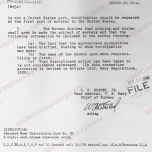 The biggest problem with M1911s wasn’t in regards to performance but related to their security, as subsequent documents would show they were frequently “souvenired” by those who carried them. (documents: Tim Plowman/NARA). 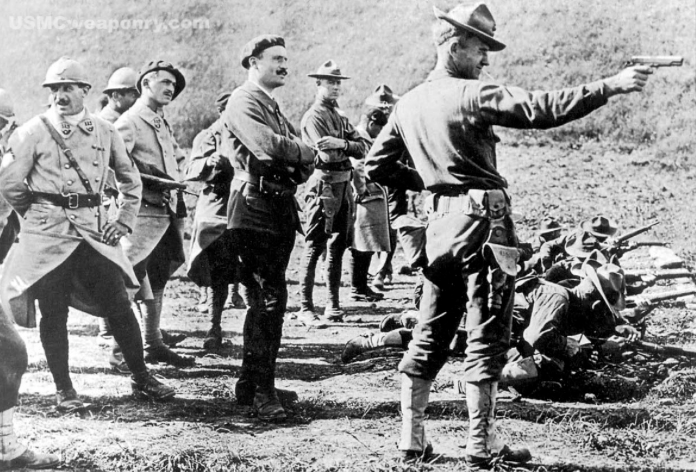 A Marine officer in France during WWI with his M1911 (photo: USMC).

The 5th and 6th Marine Regiments would be hastily outfitted with new men and arms in late 1916 and 1917. The 5th Marine Regiment would depart several months earlier than the 6th Marine Regiment, but the two would join up to comprise the 4th Marine Brigade of the army’s 2nd Infantry Division. While under army command in France, the 4th Marine Brigade would draw ammunition, clothing, and most other supplies from the army. Small arms however would still be provided by the Marine Corps and their parent appropriator, the Naval Department’s Bureau of Ordnance. It is safe to assume that the majority of M1911s in the hands of Marines in France were from the 5,500 procured from Colt prior to 1918. That said, there are some noteworthy exceptions, with several documented M1911s being in US Navy or US Army serial number contract blocks. In combat, the M1911 would prove a very resourceful weapon for Marine officers and machine gun crews. The fighting would be horrific, and the casualties tremendous. The Marine Corps would procure more M1911s in 1918 as casualties mounted and a massive influx of new recruits swelled the ranks of the service. As mentioned earlier, the days of neat, sequential shipments were gone in order to meet the demand of wartime production, and the M1911s obtained in 1918 would have spanned a large serial number range.

1917 contract USMC 1911. The majority of USMC M1911s at early WWI battles like Belleau Wood would have been from the sequentially shipped, pre-1918 Colt contracts (Tyler Anderson collection). 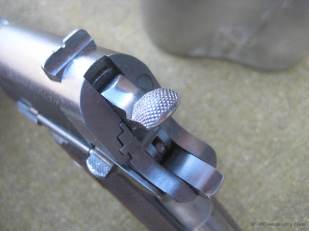 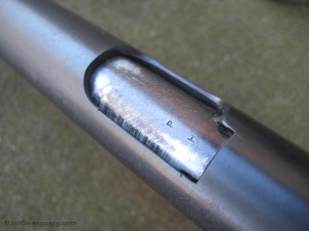 USMC M1911 from the first of several contracts received in 1917 (Tyler Anderson collection).

In the months following the cessation of World War One, the Marine Corps would receive a final shipment of M1911s as Colt and the Ordnance Department rapidly demobilized. The Marine Corps would stay busy in the years between the world wars, deploying across the South Pacific, peacekeeping in China, or fighting in various “Banana Wars” in Nicaragua and Haiti. None of these conditions were particularly favorable for the blued M1911, and the Marine Corps would begin parkerizing their weapons to provide for a much more durable finish. While pistols were not rebuilt nearly as often as service rifles, they were when needed. As such, a significant portion of USMC contract M1911s seen today are rebuilt, parkerized, or both- making original blued examples very desirable. 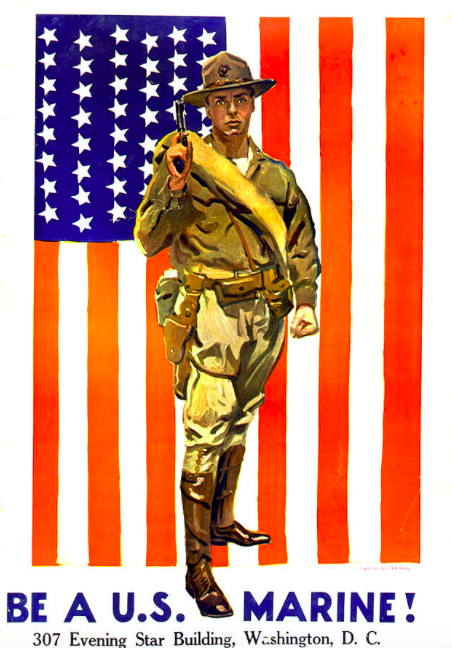 With the advent of World War Two, the Marine Corps would once again have a tremendous need for sidearms to outfit their swelling ranks. The M1911A1 would be produced by Colt, Remington Rand, Union Switch & Signal, and Ithaca (as well as Singer, but no evidence of the Marine Corps receiving any of the small amount they produced exists). Some of these new M1911A1s would have obvious units to which they would be issued, like the rapidly expanding Marine Air Wings. On the ground, the Marine Divisions would already be equipped with M1911s heading into the war, but documents show that by the end of combat M1911A1s were more commonplace. While M1911A1 distribution isn’t completely addressed in what archival documents we have, we know that the Marine Corps procured a significant amount of them. The weapons logistical situation was very complicated in 1942, with delays in the sorely needed M1 Carbine forcing policy to change many times over. The nature of combat had changed by World War Two, and the threat of enemy paratroopers and jungle ambushes left the Marine Corps with the opinion that a pistol would not be adequate for most support troops. On top of this, there was also a desire to simplify ammunition logistics amongst the divisions, with some officers going as far as suggesting that all .45 caliber weapons be replaced. The Marine Corps had hoped the M1 Carbine would be a one size fits all solution, capable of replacing the Thompson Submachine Gun, the Reising Submachine Gun (which was only adopted due to a delay in M1 Carbine production), and the M1911/A1. These hopes wouldn’t last long, as the need for both the firepower of a submachine gun and the convenience of the M1911/A1s would be accepted as fact by 1944. 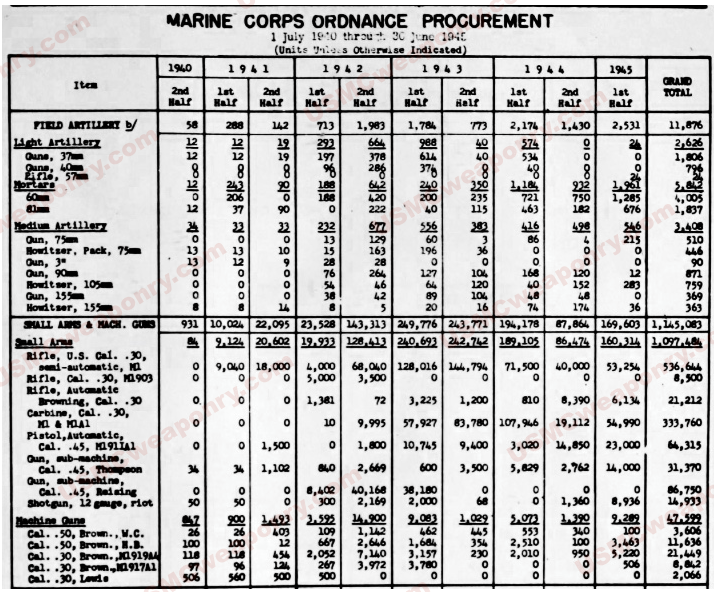 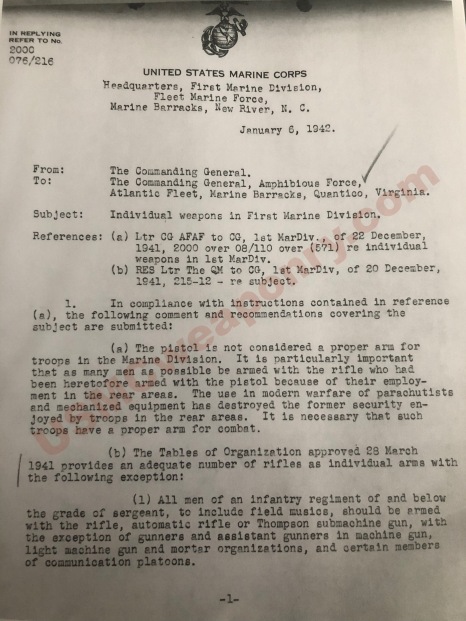 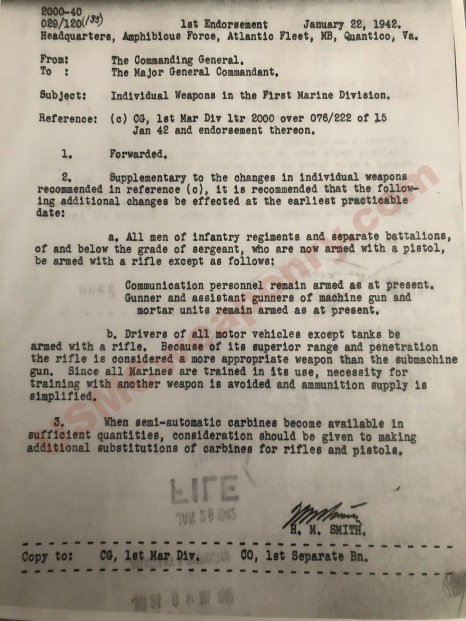 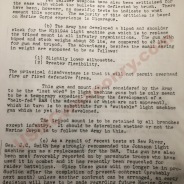 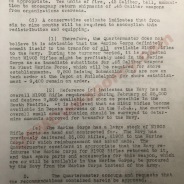 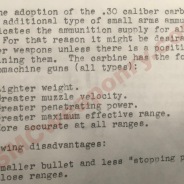 Documents detailing considerations in 1942 to replace the M1911/A1 with the M1 Carbine. These would prove to be impractical, and fall by the wayside (documents: NARA).

As more M1911A1s filtered into the Marine Divisions, some of the few documents that differentiate between M1911s and M1911A1s suggest the older model was become more of a rarity. A 1946 2nd Marine Division report shows only a few M1911s are listed in division reserve compared to a larger amount of M1911A1s. While it is possible this is due to the M1911s having already been issued and the new M1911A1s that were excess to unit needs being set aside as reserve pistols, the high percentage of pistols lost in combat (or sent home as souvenirs) would have left considerable room for the newer pistols to take their place. As with earlier conflicts, many pistols were to be reported as lost in combat or destroyed when in reality they were “acquired” by the Marines who carried them. This issue would become severe enough to warrant directives being issued from the highest levels, hoping to stem the flow of pistols (amongst other American weapons) sent stateside. 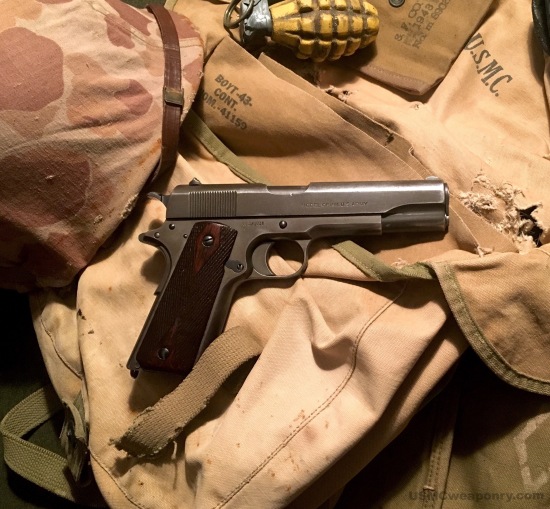 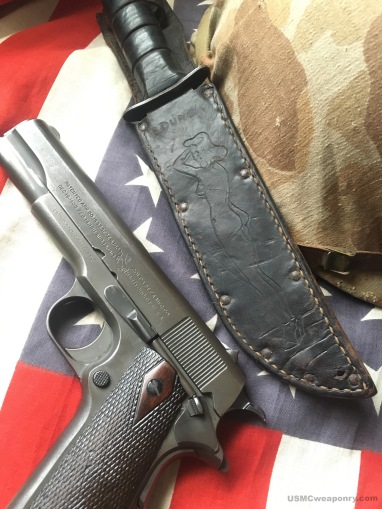 Though needing overhaul far less than service rifles, a significant amount of M1911s in the hands of Marines in WWII would have had their bluing replaced with a parkerized finish. (Tim Plowman collection).

One of the few documents fund thus far that differentiate between M1911s and M1911A1s, from the 2nd Marine Division in early 1946 (documents: Tim Plowman/NARA).

Although many more M1911A1s were procured by the Marine Corps than M1911s in WWII, they cannot be easily defined like the sequential serial number blocks of the pre-WWI Colt M1911s. As of now, the only way to identify a non-rebuilt, WWII original USMC M1911A1 is by serial number, and relatively few have been turned up in National Archives documentation. Another equally difficult option is to identify one that was purchased or obtained from the Marine Corps and has official documentation to go with it. 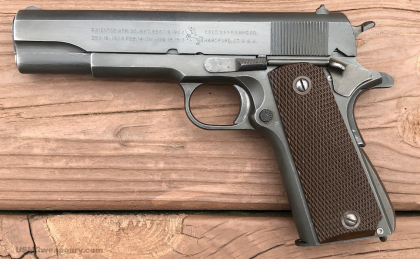 Sergeant Milton Jarman was a late WWII Marine. He held the MOS of 521, a Basic Marine. He served as a security guard and driver for Headquarters Squadron, 1st Marine Aviation Wing beginning in the late fall of 1944. His section was tasked with operations in Okinawa, specifically the defense of Yontan Airfield, which was notably attacked by Japanese commandos on the night of May 24th. While it is unclear if this was Sgt Jarman’s personal pistol, one he picked up from the many Marine casualties that cycled through his location, or one he received later while serving with the Marines in the states, he was allowed to keep it as personal property immediately prior to his discharge. The typist who prepared the document for his adjutant to sign off on was sloppy, misspelling Sgt Jarman’s name and omitting the number “1” in the pistol’s serial number, which is unfortunate. However, the totality of evidence with this pistol is overwhelming that this was indeed the pistol Sgt Jarman was in possession of. The pistol went through some sort of rebuild, and as such is not original. As per USMC order at that time, small parts were not parkerized. There are two carbon copies of the paperwork Sgt Jarman received. He would return home, start a family, and pass away in 2004 in Illinois (Gene Veillon collection).

The Marine Corps would more or less use the same small arms during the Korean War as they had in WWII, and the M1911s or M1911A1s that would be carried by the men of the 1st Marine Division would be no different. Some would still be in their original condition, while others would be rebuilt to various extents with fresh parkerizing and blackened small parts. As such, identifying a Korean War era USMC M1911/A1 is just as difficult as finding one from World War Two, with serial number documentation being the only way to prove Marine Corps provenance. That said, identification of Marine M1911A1s has recently improved dramatically, thanks to the Civilian Marksmanship Program (CMP) and their recent sales of M1911/A1s to the public. The characteristics of rebuilds from the 1960s and beyond has provided collectors an avenue for USMC M1911A1 identification. Just as was done on M1 Garands, pistols rebuilt by the Marines in this time period would have an “O” (standing for Overhaul) electropenciled onto the frame, followed by a dash and the last two digits of the year the overhaul took place. Later rebuilds would denote which of the two Marine Corps Logistics Base level five repair depots they were rebuilt at, with an “A” for Albany, or a “B” for Barstow added behind the “O”. 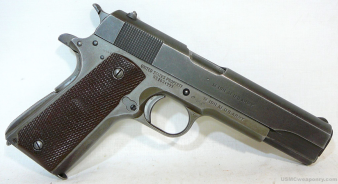 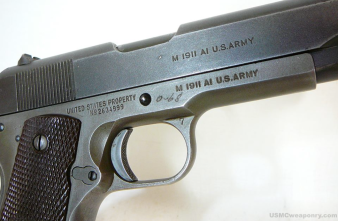 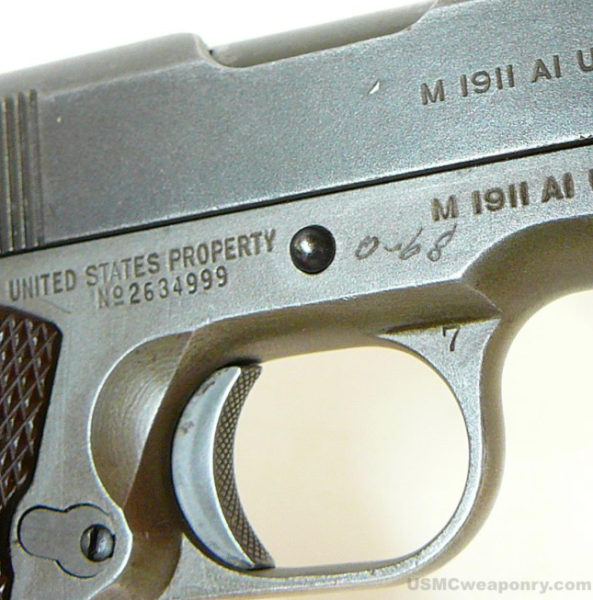 During Vietnam era, the Marine Corps would electropencil an “O” for Overhaul, followed by a dash and the last two digits of the year the overhaul took place. This Ithaca M1911A1 was rebuilt buy the Marine Corps in 1968. (Steven Norton collection).